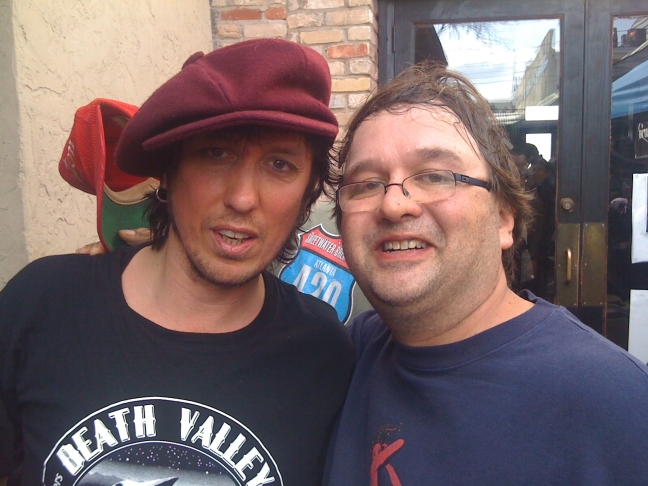 A long time ago, on a shoreline far far away there lived a boy who liked nothing more than rifling through his parents’ record collections, putting the headphones on, and disappearing to a place even further away. Particular favorites included: ‘Sgt. Pepper’s,’ ‘Apostrophe,’ ‘Cruisin’ With Ruben and the Jets,’ and ‘Out Of The Blue.’

The first album I ever owned was K-tels ‘Disco Nights’ compilation. Grandmas are good for things like that. But it did expose me to what is still my favorite (and perhaps the most slammin’) disco song ever, Foxy’s ‘Get Off.’

My first step into the purchasing of those big slabs of magic plastic was Foreigner ‘Double Vision.’ It did not disappoint, but nor did it further define me in any way. I had been tempted to buy AC/DC ‘Highway To Hell’ instead but found the horn’s sprouting from Angus’ head a little too much for my still-timid heart. This was probably just as well, as I remember dad voicing concerns about even ‘DV’s’ “lyrical content.” Can’t even imagine where ‘HTH’ would have sent his head!

Purchasing Round 2 consisted of three records at once: Aerosmith ‘Greatest Hits,’ Cheap Trick ‘Live at Budokan,’ and Van Halen ‘Women and Children First.’ I was with my other grandma at the time and was only disappointed because my uncle – who even back then had the coolest, most tricked-out stereo I’ve still ever seen, much less heard – refused to play them for me, dismissing them as ‘kid music.’ Though I felt more than a little betrayed at the time, he might’ve been right, because they hit this kid right between the ears with such force that the direct influence of each on my future musical path remains indelible to this day.

I continued to explore and found many other things I still enjoy (hell, I’m still exploring!), some of which had much in common with those first three touchstones, many of which offered nothing at all similar but instead helped me expand into new areas.

A prime example of the former was the first two Motley Crue records. And these might have been about as close a blend of all three elements as I would ever have found if it weren’t for one even more fateful purchase not too long after.

Piqued by name recognition (likely the result of an already fanatic adoration for ‘Kerrang!’ magazine, which I would later have the good fortune to write for, and a budding version of same for the Marquee where I had already once invaded the stage with my brother and would later work) and what promised to be fantastic gatefold double-live artwork, I picked up a copy of Hanoi Rocks ‘All Those Wasted Years’ and found nearly alchemic musical perfection.

I had some friends who came along for the musical ride, but none of them ever really seemed to ‘get’ them on the same level I did. I remember feeling like the only person (with the possible exception of Dano) who was truly bummed out – not just angry or indignant – when, ironically enough, Vince Neil accidentally killed Hanoi Rocks drummer Razzle on a drunken car ride in 1985.

The band pretty much imploded in the aftermath. My love remained undiluted, but I had to accept the fact that I would never get to experience my favorite-ever musical thing live and just carry on rocking-out however I could. Motorhead, Slayer, and King Diamond all took up expanded places of honor (joining the already long-beloved Priest, Maiden, and Ozzy).

I carried on looking for the next big thing to fill the void and thought it had landed with ‘Appetite for Destruction.’ D-Generation and Pure Rubbish also made high-quality if short-lived stabs at it. I even had the great good fortune of having honest to god friends make the second best version of this sort of music ever made, the Business Machines ‘Almost Automatic’. But alas, they were also not quite to be.

The years rolled by with only occasional hints at the real thing. Revived and revised versions of both Jetboy and Faster Pussycat came close enough to the mark to give hope that I’d at least be able to get some good rock kicks in every once in a while. And a lot of the new generation of garage revivalistsdid the same.

Then, as I was making plans for SXSW this year, I get a call from a friend (a former Business Machine no less) letting me know that among the acts performing at a showcase he’s involved in putting together is none other than Michael Monroe, former lead singer of Hanoi Rocks. It’s at 3:30 in the afternoon, which seems a little less than full-out rock n’ roll, but I’m excited anyway. An interesting new item has been added to the agenda.

As the weeks pass I become aware that I’m way more excited than I’m letting on. I warn friends trying to make plans with me that “the one thing I have todo is go see Mike Monroe at 3:30 on Friday.” I notice Hanoi Rocks songs popping into my head more frequently than had been the case in some time. I refuse to look online and see who might make up the rest of the band. “They’ll probably just be a bunch of people you’ve either never heard of, or have heard of and think are lame ass shit,” was the thinking. “No use disappointing myself any earlier than I have to. Either way this should be fun, and this way it’ll be a surprise.”

We’re running late getting down to the venue on the day itself and I’m doing my best not to start letting my growing anxiety/crankiness take over. We make it and find lots of cool folks I hadn’t seen in a while. Embraces are exchanged, free food pointed out (BBQ, ‘natch), beer acquired, and hanging commenced.

Somewhere during all of this I find myself staring at a guy signing an autograph. The guy looks remarkably like Ginger from the Wildhearts (one of the few other bands to come close to fully illuminating the post-Hanoi Rocks darkness). But he’s got huge sunglasses on and why the hell would he be here anyway? Just to hang out? Maybe, but…

The semi-daze surrounding this thought process is broken as the band on the patio ends its set and I overhear a sound check underway inside. Sure enough, it’s for Monroe’s set.

I position myself a few rows back from the tiny stage and begin the final wait.

The band files on one-by-one. I don’t recognize the drummer, but…holyshit! The stage-right guitarist IS fuckin’ Ginger! And…on bass? Sami-fuckin’-Yaffa himself! Guitarist two I recognize but can’t place, but they sure as hell all LOOK the part.

From the first note a quality of live, shit-kicking, liquor slamming rock n’ roll only imagined in the wake of Hanoi Rocks almost literally tears from the speakers. Countless waves of 20-year olds have tried to pull this shit off for the past 25 years and all are instantly eclipsed. But this is no time machine. Only a couple of Hanoi Rocks classics are played –‘Motorvatin’ and ‘Malibu Beach Nightmare’— and the sheer enthusiasm, sometimes bordering on ferocity, of the performance makes everything else offered an instant classic.

When Cheetah Chrome comes on to perform the Dead Boys ‘Ain’t Nothin’ To Do’ with the band some inescapable nostalgia emerges, but the performance given is still vital, as opposed to plodding or hokey.

The band leave the stage after tearing through Monroe’s one solo ‘hit’ (‘Dead, Jail, or Rock n’ Roll’) and nothing can really be said. Everyone is soaked in sweat. It’s still just 4:15. And I’ve just seen what pretty much WAS a Hanoi Rocks show. Monroe, Yaffa, and Ginger on one stage?? C’mon!

I wander to the back patio in hopes of catching a word with one of them. After milling about for a few minutes, a side door opens and out pops Sami and companion. I let them order a round and make my approach. What comes next is a very polite introduction of self, followed by about 2 minutes of non-stop gushing, and then some sincere two-way conversation. Dude could not have possibly been more laid back, pleasant, or gracious.

Just as I’m saying thanks for the show and getting ready to shove off, the PA announces a ‘meet and greet’ on the back patio. I’ve already met Sami, but decide what the heck, let’s stick around and see what happens. A few minutes later the door pops open again and out come the rest of the band (Monroe, Ginger, Steve Conte, and drummer Karl Rockfist).

A short, happy line quickly forms. And a few minutes later there I am, meeting Mr. Monroe. The guy is actually  just hanging out and chatting with anyone interested enough to do so, so we have a word (gushing-meets-grace, Round 2), pose for the camera, and history is made.

But as I’m about to turn and leave yet one more time, there stands Ginger. Dude had only gotten up to answer a question from one of the staff and doesn’t necessarily have a warm fuzzy rep so I save gushing Round 3 (even though I’m feeling it) and just tell him what a great time I had and ask if I could have a picture with him.

Along the way I inquire as to how life in Shitsville (London NW3, a postal code in which I too have resided) is these days. “I dunno. I don’t live there anymore.” Even better then! Good to see you over here again anyway. ‘Well you should be seeing me more often.’ Good news, whatever it might mean.

And that, finally, was that.

I was, however, practically levitating. As I said earlier, I never thought I’d see them perform live in my lifetime, much less do it well. And I certainly didn’t expect ANY of the other b.s.

I still feel myself tearing up when I look at the photos for more than a moment or two.

Dude was a unicorn to me. And I am a Geek.