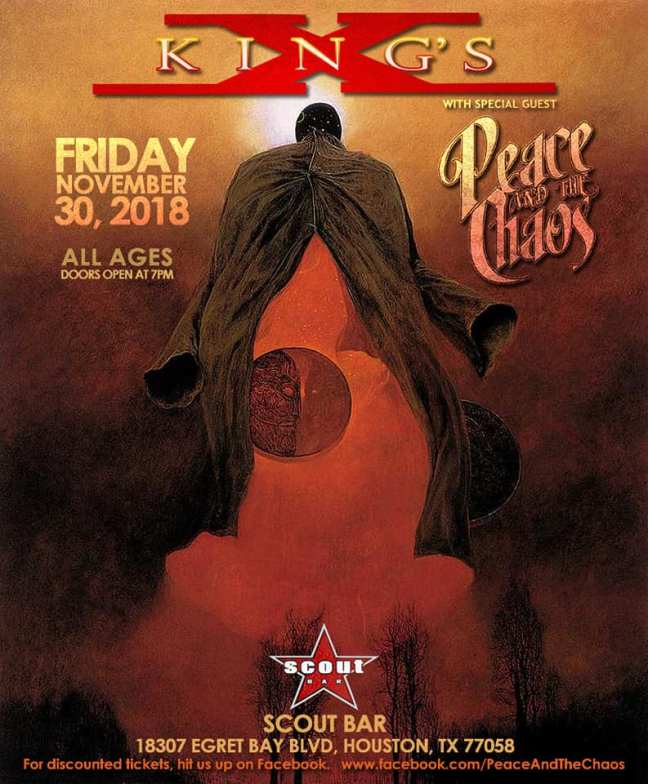 What better way to celebrate the return of cold weather than to rock!?

King’s X evidently agrees, booking a series of Texas and Milwaukee-Chicagoland dates sure to please both dedicated fans and any newcomers looking for shelter.

The fun kicks off with a homecoming show south of Houston at Scout Bar on Nov. 30. Upping the ante for this one is Beaumont-Houston powerhouse Peace and The Chaos: Blake Sticker, Kenneth Q. Turner, Lenwood Sonnier and Wally Farkas. Those last two names should already be familiar to any King’s X fan, but the other fellas are going to blow your mind. You ain’t seen sangin’, slangin,’ and bangin’ like this in I don’t even know how long.

Peace and The Chaos are the flag bearers of this newly (like right this second) established genre. See them first so you can spread the word and be cool like that.

The Texas swing continues with stops at Canton Hall (Dallas) and Come and Take It Live (Austin). PATC will be on the Austin bill but not Dallas. They will, however, be playing a FREE 5 pm set at Good Records in Dallas before the King’s X action kicks off.

Get your tickets to any and all of these shows below. Then keep scrolling for a taste of what you’ll be experiencing once you’re there!

Excerpts from ‘What You Make It: The Authorized Biography of Doug Pinnick’

“One of the stops on the road with [Morgan] Cryar in 1984 was Sulphur, La., where Dane Sonnier had a 10th grade English teacher who knew he and Lenwood (then 13) played guitar and told them about the show. Dane and Len’s parents bought them tickets. They had good seats in a little theater and even as a backing musician, Doug’s stage appeal was inescapable. After performing, the band came out to talk with the audience. Dane met Doug and the two struck up a conversation, exchanged addresses, and became pen pals. Doug’s mail to Dane would be addressed to Dane “The Child Prodigy” Sonnier and encouraged his pursuit of music.”

“The seeds of branching out [for ‘Strum Sum Up’] were sown when Doug initially returned to the 10 songs that hadn’t been used for ‘XV’ to finish them. He’d always found his guitar playing sloppy and wanted to hear what the songs would sound like cleaned up. The whole process was also taking a lot longer than he wanted. He called Farkas, who at the time was living just down the street from Doug at Ty’s house.   Farkas went to Poundhound [studio] to lay down some tracks. Doug showed Wally how to play the parts, then hit record. “We knocked out all the guitar parts, double-tracked and everything, for an entire album’s worth of material in a day,” remembers Farkas. When Doug played them back, listening to just Farkas and the drum machine, he was blown away. There was life to his solo music, and all it took was a real guitar player!”

Hard copy and Kindle editions of ‘What You Make It’ are available NOW on Amazon.

You can also buy the hard copy through Barnes & Noble.

“Not your generic ‘sex, drugs and rock ‘n’ roll’ biography designed to cash in on some nostalgia. Smith has done a superb job capturing the life of [an] iconic and respected musician.” – Metal-Rules.com

“Smith manages to cover a lot of ground and provides an insight into one of the best musicians of our time. [‘What You Make It’] is highly suggested if you are a fan of King’s X or Doug Pinnick.” – Read, Rock, Repeat

“This isn’t a eulogy to a ‘big time Charlie’ rock star. Rather, the book tries to explain the journey of a man who looks to music to save him from a certain amount of life confusion. It’s atypical, which is surely a good thing in these days of formulaic, plodding biogs…. Smith writes with knowledge and enthusiasm.” – Rock Candy