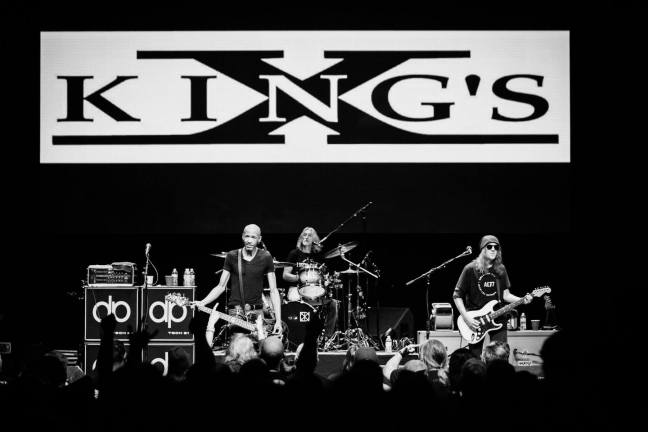 Back in July, to have some fun with Doug’s wonderful fans, I set up a 64-entry bracket to determine King’s X’s most beloved song ever. And after 10s of thousands of votes cast, the winner is: ‘Over My Head’!

This outcome will likely not come as a surprise to anyone who has seen the band live, ‘Over My Head’ having long held a place of honor near the end of a King’s X set. The band regularly extends the song past the 10-min mark, Ty and Jerry holding down the groove while Doug calls the congregation together for a combination sermon and sing-along.

The victory is also appropriate given the bracket’s mission: to find King’s X’s MOST BELOVED song. ‘BEST song’ is a category that can be debated forever, with a tournament attempting to address the topic likely doomed to failure from the start.,

‘Over My Head’ beat out Gretchen Goes to Nebraska album-mate ‘Pleiades’ for the top spot, 56% to 44%.

The 64 songs selected were a combination of the band’s most popular, its live standards, fan favorites, and my own favorites. I briefly considered seeding the entries, but decided that could slant the contest too much towards my own preferences and put them in an online randomizer instead.

As it turned out, I’m pretty sure ‘Over My Head’ had this from the beginning.

Enjoy a few different performances of it at the end of the post, starting with the studio version from ‘Gretchen Goes To Nebraska.’

“Back in Katy after the tour, Doug and Ty started songwriting, Sam cautioning the band about the potential for a sophomore slump. “We can’t have that,” he said. “You got great acclaim on the first one, and everybody’s expecting the second one to be crap. I want to hear everything you’ve got.”

The band pulled all its demos, going back years. Among them was a 2-track recording of ‘Over My Head’ Doug had made using a microphone, a tape player, and a recorder. He had faced the speakers toward each other to record one another, used a Mattel drum machine, and wrote the whole song, almost just the way it came out in the finished version. Doug didn’t like it. He thought the chorus didn’t go anywhere and that the song as a whole didn’t work.

He had thrown it in a pile with the rest of his perceived misfires and there it sat until Sam’s demo roundup.

When Doug heard it start as he was playing his songs for Sam, he moved to skip it, describing it as “a piece of crap.”

Ty, Jerry, and Sam all loved it.

Doug still didn’t like the song, but took their word regarding its qualities and moved on.”

Excerpt from ‘What You Make It: The Authorized Biography of Doug Pinnick” https://www.amazon.com/dp/B07CZXHK3L

One thought on “King’s X Most Beloved Song Ever: ‘Over My Head’”